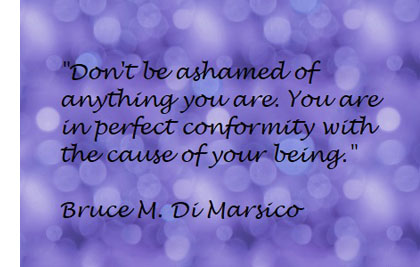 I’d go further and say both guilt and shame stem from the belief that I am bad.  Saying I did something bad – in the sense that we feel guilty (or bad) about it, is the same as saying I am bad. Otherwise we would never feel bad about it. We would simply observe – Oh I did something that caused xyz to happen. Think about something you feel guilty about and ask yourself this question: If I didn’t feel guilty about that, what am I afraid would happen?” The answer to this question will most likely sound something like, “If I wasn’t guilty it would mean I wouldn’t care about [correcting the behavior I feel guilty about”]. And what could be more self-condemning than not trusting that we will take care of things we really care about?

It’s interesting to learn about all the machinations of guilt and shame, but at the end of the day, the best way to learn about our own guilt and shame is to explore for ourselves. The Option Method is particularly suited to do this with its laser-like focus on beliefs. In my work as an Option Method master teacher, I come across shame and guilt in dialogues regularly, although it rarely comes up as an “agenda item” so to speak. In other words, when I ask my usual opening question of How can I help you today? – it is rare that someone will say, “I want to stop feeling guilty about such and such, or I want to stop feeling shame.”  I suspect the reason is that many people just accept guilt and shame as normal and even beneficial.  We want to feel guilty and we want others to feel guilty. Otherwise, how can we know we (or they) will never do the “bad” thing again? We want to feel shame to prove that even though we did something shameful, at least we know enough to feel bad about it.

We have an expression in The Option Method, called “peeling the onion.” What that means is that as we identify and clarify our unhappiness, drilling down to the underlying belief, we can then get down to the next level, where feelings like guilt and shame often reside.  So often, whatever people start with in a dialogue, eventually they will get down to feelings like guilt and shame.  Some common examples are frustration over not being able to lose weight (shame that I can’t take care of myself), anger at losing a job (shame that I can’t support my family), sadness over the loss of a loved one (guilt that I didn’t spend more time with them).   I think of guilt and shame as foundational beliefs that “I am bad.” It is that belief that keeps us in the cycle of guilt and shame.

The power of forgiveness in releasing guilt and shame.

Often, guilt and shame are emotions we’ve been holding onto for a long time, perhaps our entire lives. Revealing how guilt and shame fit into our belief architecture and understanding the real reason behind them is often the end of suffering for people. Sometimes, though a person might feel shame or embarrassment about having these feelings once they learn that it is within their power to let go. They ask the question, “Why didn’t I know this before?” distrusting their ability to let it go.  Forgiveness can be a powerful antidote at this stage. Bruce Di Marsico, creator of the Option Method, writes about this in The Myth of Unhappiness, Vol. 2, saying:

One of the greatest problems with unhappiness, when we’re trying to
help people be happy, is for them to learn how to forgive themselves.
There’s a saying we have in Option: ‘True forgiveness is knowing that
there’s nothing to forgive.’ You’ve never done anything ever in your
whole lives to be ashamed of. You just believed you have. You’ve
never done anything in your life to be ashamed of. You have merely
believed you have. Things like that become axioms when you start
exploring and you find out that it’s always true.

We never find real shame. We only find people who believe they ought
to be ashamed. If you look at your life you can’t find anything that you
really ought to be ashamed of, only what you believed you ought to be
ashamed of. You really, probably could see pretty easily that there are
no obstacles to your being really happy, if you are willing to look. And
I think one of the glories of the Option Method is that it frees you up to
realize that. Since you’re not at fault and you quickly come to know
you’re not at fault, you can start to see this. So the whole point of the
Option Method is to bring us to understand that it’s not a mystery that
we get unhappy, not to learn that we are at fault for our unhappiness or
that we should be happy.